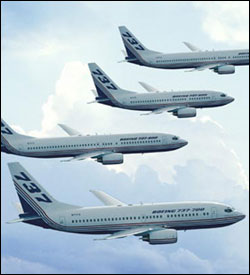 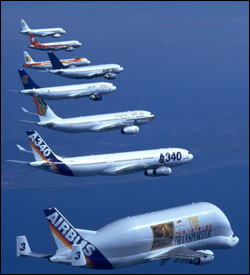 It's Airbus vs. Boeing: Largest Trade War in WTO History May Have Just Begun

The battle between the European Union and the United States over the public subsidization of Boeing and Airbus has resulted in a commercial conflict that may be, "the largest, most difficult and most expensive in the history of the World Trade Organization."

The European Union and the United States resumed yesterday, after a 5-month truce called for negotiations, a commercial war against public subsidies for the manufacturers of Airbus and Boeing aircraft. The dispute threatens to become the largest, most difficult and most expensive in the history of the World Trade Organization, European Union trade chief  Peter Mandelson said.

Brussels will again denounce before the WTO the $3 billion in public assistance that Washington has granted since 1992 to Boeing, the North American aircraft manufacturer, in response to a similar demand made last night by the United States over the subsidies that the Twenty-five [the E.U.] grant Airbus.

Mandelson warned that they are thousands of jobs at stake, as much in the E.U. as in the U.S., and recalled that millions of passengers fly on aircraft built by the two companies. For that reason, he said he was sorry that the U.S. has chosen to go to Geneva [WTO headquarters] instead of solving the issue through talks, and he indicated that the objective is "to damage" the launch of the new Airbus 350, which competes with Boeing’s Dreamliner 7E7.

Mandelson, criticizing involving the WTO in, "a grudge match between Boeing and Airbus to control the global market, where there is room for both companies," added, "Commercially, Airbus is a great success, and for that reason this complaint has been made. What Boeing fears is the competition, not to the subsidies.”

"I am convinced that the launch subsidies for Airbus are compatible with WTO rules. I also believe that the United States is wrongfully subsidizing Boeing," Mandelson said. In his opinion, the E.U. has a "strong case" and is not acting defensively, but has waited until the last minute in order to find a solution. In this regard, he disclosed that last week he offered to cut subsidies to Airbus by 30% in exchange for a similar reduction for Boeing to U.S. Trade Representative Robert Portman.

In total, Brussels claims that Boeing has “received massive assistance” totaling $3.66 billion since 1992. Since 1992, Boeing has benefited from research and development credits from NASA and the Pentagon totaling $2.2 billion. For the construction of the new B787, the North American manufacturer will also receive aid covering 70% of the total cost, itself covering only 15%, according to Mandelson.

In addition, Washington has granted more than $7 million for launching the 787, and Japan, where part of the plane is constructed, has offered up to $1.6 billion in soft loans to the Japanese companies involved in the project. Finally, Boeing will continue to receive, for an indeterminate length of time, a $200 million per year subsidy from the Foreign Trade Corporation export program, a program that has twice been declared illegal by the WTO and have been discontinued most North American firms.

The U.S. trade representative, Robert Portman, justified Washington’s decision to go to the WTO by the fact that several E.U. member states had granted a new package of subsidies to Airbus totaling $2 billion to develop the A-350.

"The insistence of the E.U. to go ahead with new subsidies forced our hand," Portman explained in an official statement. Portman indicated that Washington would request the creation of an official WTO panel on this case next Tuesday at the organization’s headquarters in Geneva.

Portman declared that the U.S. continues to prefer "a negotiated solution" rather than resorting to the WTO and explained that by requesting the formation of the panel, Washington is "giving time to the E.U. to reconsider its plans to provide new subsidies" to Airbus.

He also said that up to now the E.U. has only offered to reduce – and not eliminate – public subsidies, whereas the U.S. wants to eliminate them. "We still think that a negotiated bilateral solution is possible, but the negotiations would not succeed unless the E.U. is committed to end subsidies," added.

Over recent months, the E.U. and the U.S. have maintained a commercial war over subsidies to both major aircraft manufacturers. Both sides insist that these subsidies distort competition, so in October of 2004 they took the dispute to the WTO.

On January 11, they decreed a truce and reentered negotiations to find friendly solution, but little progress has been made. Airbus has asked Spain, France and the United Kingdom for loans to develop the A-350, a medium-sized passenger airplane destined to compete with Boeing’s 787 Dreamliner.

The United States is against these new subsidies, and complains that as of now, the Europeans have granted $1.5 billion in direct public aid to Airbus for launching new Airbus models.