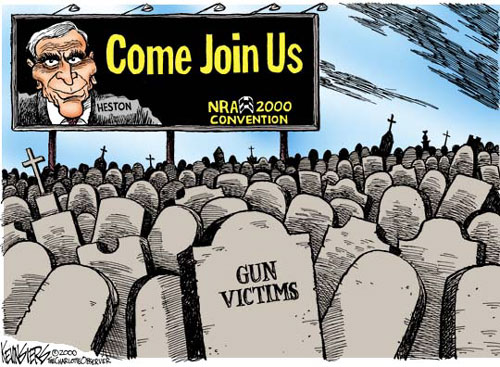 In a country that already leads the world in the number of firearms in circulation and the number of murders committed with them, the State of Florida has done the rest of America one better. According to this editorial from Mexico’s El Tiempo, a new Florida law means that visitors to the State should take care not to be ‘the next person that some armed gringo considers a threat.’

Tourists who travel to the and especially to Florida now have new cause for worry. In addition to innumerable body checks, luggage checks and walks through metal detectors and x-ray machines - turning every passage through the Miami airport into an exercise in torture - a much worse problem now emerges: the danger of being shot in the street, a vehicle or even an office, without explanation and without any form of redress.

Incredible but true. Like the old days of the wild and bloody West, the law of the gun is back in force in the State of Florida, with the passage of a law approved by the State Legislature. The new legislation authorizes citizens to attack, stab or shoot anyone that they deem to be a threat, or with whom they have some dispute, without needing to face trial in the courts. And as if this wasn’t enough, the same coalition that pushed for this law is working to pass another, which would authorize employees to keep firearms in their office desks, lockers or other places of work, as well as their company vehicles, whether or not their employers agree.

The new rules are defended by their promoters, among them, Governor Jeb Bush, with the argument that this will better promote public safety. But the truth is that behind them stands the powerful National Rifle Association  (NRA), which has taken full advantage of the river of fear that flows from terrorism to promote the ever-more indiscriminate sale of weapons in the . This, despite the fact that the country already leads the world, by a huge margin, in terms of firearms in circulation (300 million in the hands of 290 million inhabitants), along with the number of homicides committed with those firearms (about 130,000 per year), which is five times above the global average, according to the Geneva-based Small Arms Survey.

Now tourists are in danger of swelling those statistics even further. Therefore, pay attention: when one travels there, smile, and don’t cross anyone that puts their hands in their pockets. Don’t be the next person that some armed gringo considers a threat.